Not Seeing the Forest for the Trees 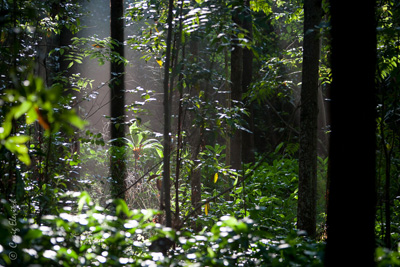 In (re)afforestation work we usually talk about the planting of trees. Lots of 'em. But there's a fundamental limitation in this ethic that planting trees is what we need to save the planet. We should be rather talking about planting forests. Until our planting site has in it the components of the Mother of all plantations - the climax forest system - the "trees" we plant will always be weak and prone to exposure, disease and drought. Could this be why in America the U.S. Department of Agriculture accepts an 85% mortality rate in its plantations on clear fell sites over 100 Ha?

This is illustrated by a tale of connections in the North American Pacific Coast Forests, between Douglas fir (Pseudotsuga mensezii), soil mycorrhizae and a certain Red Tree Vole. The vole was found to transport spores of the mycorrhizae, needed by the fir for its uptake of soil nutrients within the soil of these forests. On clearfell sites, the habitat of the vole was destroyed and thus it would disappear. As a result, survival of fir seedlings was severely reduced. These components survive together and benefit each other in a symbiotic association known in Permaculture circles as guilds. In design, we work to create guilds, or rather to place the right species in such a way that they can create themselves. This illustrates the importance of diversity in our plantations.

Thus we are not just looking at planting trees, but accommodating the soil life which is the foundation of healthy biological systems, be they forests, wetlands or prairie grasslands. In one gramme of undisturbed forest soil there may be 1000 million bacteria. These are the life, the very creators of the soil and thus everything that grows upon it. They give the "productive capacity" of our soil. Roots of plants growing in undisturbed soils form associations with the soil microorganisms - the latter make nutrients available for the former, and the microorganisms gain carbon in particular. Up to 80% of Carbon fixed in photosynthesis goes into below ground processes. While this carbon is "lost" to the plant, it is not lost to the system, of which the plant is only a part. The soil organisms improve plant growth through effects on nutrient cycling, pathogens, soil aeration and water holding capacity. Giving priority to feeding and supporting the life in the soil makes caring for plants growing there a much easier task.

A further lesson from Nature we would be wise to apply is the principle of succession - the redevelopment of the climax system following disturbance. In forests, this may occur naturally in landslides or the toppling of aged trees, creating clearings in the forests. The human causes are well known - clearfell, livestock pressure, etc. In either situation, if allowed, Nature will re-colonise sites using biological systems specifically adapted to the situation. If soil is poor and soil moisture low, She will establish plants which can survive. These can be called "pioneer" ground covers, followed by pioneer shrubs and trees. Often they are nitrogen-fixing legumes, able to synthesize nutrients from the air when they're not available in the soil. Such plants have the chief purpose of preparing the ground for the next stage - covering and protecting the soil, giving natural water and nutrient cycles a jump-start, and thus giving species which would not otherwise have survived a suitable niche in which to thrive. This process continues, each stage leading to a more fertile one, where the ability for a greater range and diversity of species to thrive increases until the climax state is reached once more. Throughout this process the annidated nature of the system becomes evident, with multi-storey "stacking" producing crops and system yields in a vertical plane as well as the "conventional" horizontal system (as with mono-crops).

For vital growth of biological systems, such processes and conditions are dependent on a few crucial factors mainly in the soil surface areas - moisture, air (oxygen), organic matter, temperature, the presence of symbiotic relationships (Friends), etc. When any one of these factors is sub-optimal or missing, growth is impaired even if other needs are in abundance. All the irrigation in the world will not produce an orchard if there is no fertility in the soil, and vice-versa.

Implication for design - in imitation of nature

So the simple planting of trees is thus changed to creating, or allowing, complex interactions based on what happens naturally. We design to imitate this because it's efficient - nature does it using only sunlight - and successful. Design is also about reducing the limiting factors for optimum productivity.

"Permaculture" is the direct application of the principles of ecology.

(Nature) in the design of sustainable human habitats.

Our designs need to incorporate as many as possible of the above principles when looking at forest plantations. We have a series of design options, for which we need to understand factors such as:

When we have an idea of such criteria, we select and place the elements to work together, satisfying human and ecological needs of the site.

We can then fit additional functions in and around our plantation with the following examples:

The conventional method of mono-crop planting at 2.5m spacing ignores all the opportunities of working with the diversity, succession and stacking principles of natural systems. Similarly, to plant climax-type trees at such spacing can be a waste when they'll need selecting anyway. The above design template allows for diversity, succession, stacking, rapid covering of the ground and quick production too. The latter is important for example when farmers are foregoing grazing needs by protecting the site - but within three to six months fodder can be harvested from the developing understorey. We certainly don't need to be afraid of over planting. Research shows that Gliricidia sepium can reach densities of up to forty thousand trees per Hectare (i.e. 50cm distance between plants) before biomass production is reduced.

Experiments in Britain, North America and Nepal have illustrated the principle of needing to plant the system, not just the tree. Plantations where a couple of handfuls of forest soil (especially when from a mature tree of the same species) were placed in the pit in the root zone have showed over 50% better survival than those with no inoculant.

This design is only used to illustrate the principles, however. There are countless ways of adapting the design according to needs of the site and user group.

Where sites are very poor or if the right planting materials, time, or labour is in short supply, then the establishment does not have to happen at the same time. We can start by broadcasting the pioneers, such as Artemisia, Sesbania, Crotolaria, Cassia, etc. and next year, following cut-and-mulching of these, establish the next layer. Eventually, the most valuable, long lasting climax species (which you've been growing yourselves in a local nursery in the meantime, of course) can be added.

Any tree species planted as seedlings will benefit from a nurse crop of pioneer/green manure/legume-type plants sown close around. We have used Sesbania, Crotolaria, and Cassia to do this - they grow quick (and will self-seed), so providing shelter on exposed sites (or a sun trap if planted in an arc open to the sun-side where sunlight is in short supply), as well as fixing nitrogen, and bump-starting the soil life processes.

The design can vary in terms of products over horizontal and vertical planes, for example layers of fruit at all levels (vertically), or clumps of fruit at mid-canopy level, fodder at ground level, timber trees at upper canopy level, etc. We can play with succession by cutting (thinning) to maintain clearings at ground level, thus a high degree of edge diversity around the clearing. So design varies as succession continues.

So if you think this is getting complicated, imagine varying all these dimensions (horizontal, vertical, time and relationships) at once! This is the traditional way of forest farming - the Cavite (Philippines), Chagga (Tanzania), the Western Ghats (Goa, India) are living examples. In Western Nepal, the Raute (meaning "Lords of the jungle"), nomadic hunter-gatherers on the verge of extinction take it a step further - they just wander through natural forests, gathering what they need and not returning for up to nine years. They don't even have to plant!

Which just leaves one option, to merely protect a site and allow nature to do the rest. However, the above design principles allow us to create intensely productive systems for humans, thus taking the pressure off damaged forest areas, allowing them to exist for their own intrinsic value, and for the health of the Earth.

The principles and variations of plantation and agroforestry design are limited when taught in two dimensions. A fun way is to use an earth pile, and sticks of different length and thickness, from tall, thick sticks (climax trees) to short pieces of straw (ground cover layer). Students can mould landscapes according to their own situations.