Without fungi, there are no forests. Mycoforestry is the use of fungi to sustain forest communities. Mycoforestry can be used to help accomplish the following goals:

Mushrooms contribute phosphorus and confer other ecological benefits to the riparian and forest ecosystems. Mushrooms become launching platforms for explosive growth of bacterial populations, many of which are critical for plant health. Mushrooms have a preselecting influence on the bacteria sharing their habitat (Tornberg et al. 2003). Bacteria beneficial to trees regulate inputs and outputs of nitrogen and are phosphorus limited (Sundareshwar et al. 2003). Mycelium absorbs phosphorus from its surroundings, moving these mineral salts over distances, and later releases this mineral when mushrooms rot or the mycelium dies. Fungal-decomposing bacteria then absorb the phosphorus. As the mushrooms rot, the ecosystem benefits from this cycling of essential minerals in which the bacteria allow phosphorus, zinc, potassium, and other minerals to be redeposited back into the nutritional bank.

In other words, mushroom remains fertilize the ecosystem. Other organisms quickly consume the dying and rotting mushrooms. As plants grow, their falling leaves, branches, and flowers enter into fungal cycle of decomposition. This response - a highly energized state of regrowth - is nature's safeguard for rapid, adaptive habitat renewal. After catastrophes strike, the saprophytes lead the way toward renewal, supporting the construction of complex life-supporting soils.

Reforestation efforts are greatly enhanced when mycorrhizae are introduced to sprouting seeds or to the roots of young trees before or at the time of planting. The value of fungi is being increasingly recognized when economists assess forests. Many researchers sincerely believe that secondary products from woodland ecosystems, in addition to the other benefits they offer, provide strong economic incentives to leave the forests intact. And beyond short-term economic incentives, forests affect climate and prevent desertification. Placing an economic value on an aesthetic - for instance unspoiled landscapes, an incalculable like biodiversity, or undiscovered mycomedicines - confronts the simplistic conclusions of conventional economic models that compare timber and mushrooms as two mutually exclusive commodities. From an economic perspective, many biologists believe the biosphere is underappreciated.

Taking into consideration high-value mushrooms such as matsutake, the economic benefits of preserving the woodlands increasingly outweighs the short-term gains of logging, assuming the economic ratios remain on par. A study by Alexander et al. (2002) using a Soil Evaluation Equivalent (SEV) formula found that, in south Central Oregon, a comparison of harvesting timber and matsutake mushrooms yielded close to the same economic benefit from the land over the same time period. This evaluation, however, does not factor many other positives in not cutting the timber - enriching soils, reducing erosion, helping the health of streams, increasing biodiversity, improving air quality, effecting regional cooling (thereby offsetting global warming) and, some particularly incalculable aesthetics: the experiential pleasure a person or family has in the pursuit of wild mushrooms while walking through verdant natural landscapes. In fact, wild mushrooming, according to a United Nations report by Eric Boa (2004), has worldwide socioeconomic significance.

Selective harvesting of developing second- and third-growth forests, however, when done with the intention of preserving other secondary forest products such as mushrooms, may prove to be the best practice for sustaining profits. These principles are the cornerstone of an emergent new management strategy called "ecoforestry."

The manner in which mushrooms are harvested, too, has a dramatic impact on subsequent crops. For instance, a study in southern Oregon showed that when matsutake patches were raked and the divots from the harvested mushrooms were not recovered with duff, matsutake crops in subsequent years plummeted 75-90 percent; if harvesters recovered the divots after shallow raking, yields were not adversely affected (Eberhart et al. 2003). Similarly, no adverse effects were noticed over a decade of harvesting chanterelles in a forest west of Portland, Oregon (Pilz et al. 1993, 2003), where the preferred practice was to cut the mushrooms while picking, leaving the stem butts undisturbed. We now know that chanterelles often come up in pairs, and if harvesters cut only one partner, then the other mushroom, often hidden from view as a resting primordium, can grow to maturity. Perfecting harvesting practices to protect future harvests dramatically improves the profitability of the mushroom-harvesting industry.

We can't yet accurately assess the value of our old-growth forests, but the valuations continually increase directly in proportion to our knowledge. If a mushroom species exclusive to the old-growth forest prevents a viral epidemic that could kill millions and cost billions, how do we value it? Mushroom species producing enzymes to break down VX toxin and antibiotics protecting cells from pox and HIV viruses dramatically increases the value of old-growth forests. Losing these antiviral species in order to improve the quarterly reports of lumber companies may cost our civilization far more in economic terms than it gains for a single industry: the future of our species may literally be at stake.

After loggers haul trees away, vast debris fields remain behind: stumps, brush, and downed small-diameter or otherwise unmarketable trees. Until this wood debris decomposes, its biomass is locked away from the food web and is therefore unavailable to bacteria, protozoa, insects, plants, animals, and other fungi, some of which would dismantle the cellular structure of wood, freeing nutrients. In order to stimulate decomposition and trigger habitat recovery, we can selectively introduce keystone mushroom species such as saprophytic fungi, the first species to feed on dead wood.

Making wood debris fields more fungus friendly speeds up decomposition and helps the decomposition cycles become more balanced. To help nature recalibrate after logging, fungi must be brought into close contact with the dead wood so that the forest floor can act as a springboard for saprophytic and other fungi, which are instruments of the forest's immune system, ready to heal its wounds. For several years after a forest has been cut, the mycosphere survives underground, with an increasing loss of diversity over time unless plant communities and debris fields are renewed.

In forestlands, mycelium follows trails of fallen wood. Sticks and branches making ground contact are soon consumed by mycelium from existing fungal communities. From the ground, mycelia literally reach up into the newly available wood. Whether wood is whole or fragmented affects the rate at which nutrients return to the soil: wood chips are quickly consumed by fungal mycelium, whereas logs decompose much slower. I recommend creating a matrix by chipping wood into variably sized fragments in order to let mycelium quickly grab and invade the wood. Wood fragments with greater surface areas are more likely to have contact with spores or mycelium; this is especially true in the cultivation of mushrooms where spawn growth is integral to success. The fungal recycling of wood chips lessens reliance on fertilizers, herbicides, and pesticides. So leaving the chips in the woods helps recovering forest soils just like leaving stubble on farmed land helps agricultural soil. However, if the wood is reduced to too fine a dust and piled too deeply, it suffocates aerobic fungi, including beneficial saprophytes, and anaerobic organisms flourish; chips should be no smaller than 1/8 inch and piled no more than a foot deep.

Mycoforestry is a newly emerging science, an off-shoot of ecoforestry practices with an emphasis on the role of beneficial fungi. As with any new scientific path, guidelines help steer the course of research and the development of new implementation strategies.

The guiding principles I foresee are: 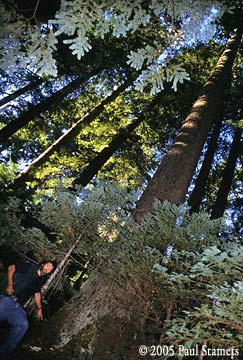 Figure 1. In the ancient forests carpeting Mount Rainier, I encountered a large noble fir (Abies procera) hosting a noble polypore (Bridgeoporus nobilissimus) at its base. 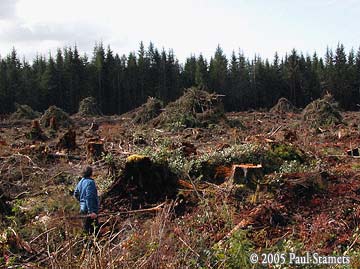 Figure 2. Piles of branches sit undecomposed after 20+ years on a farm on the border of Mason and Thurston counties, Washington State. Had this wood been chipped, placed into contact with the ground, and/or shaded, saprophytic fungi would have flourished, and debris by-products would have reentered the food chain. Brush piles like this one also pose a fire hazard, since the elevated wood dries, hardens and resists rot.

With the generous permission of the author, this edition of The Overstory was adapted from the original manuscript for:

For more information or to order the book, visit fungi.com or tenspeedpress.com/catalog/tenspeed/item.php3?id=1651

Paul Stamets has authored numerous books, including Growing Gourmet & Medicinal Mushrooms, which describes methods for incorporating mushrooms and mycotechnologies within a permaculture model. He has been published in numerous journals, and presented innumerable lectures on mycology. He has discovered and named four new species of mushrooms. Active in sourcing new strains of medicinal mushrooms, his business Fungi Perfecti serves cultivators and scientists worldwide including as an advisor to the Program for Integrative Medicine at the University of Arizona Medical School. Paul has been awarded a breakthrough patent on using fungi to replace chemical pesticides in a way that does not harm the environment of the genome and has 16 patents pending. His newest book, from which this article is excerpted, Mycelium Running: How Mushrooms Can Help Save the World will be published in October 2005. Paul teaches workshops at his farms located at the base of the Olympic Peninsula of Washington State, USA.

Related editions to The Overstory

Cool Books for YOU...